Re-blog by P2alm:   Many Christians and many prophecy sites are intently focused on things like the Illuminati, the NWO, the United Nations, occult symbolism, a one-world this, a one-world that, etc. (very real things), all in the name of prophecy while missing all the real, prophetic action. 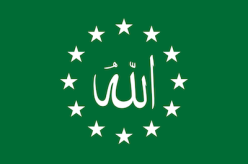 What many Christians are recognizing is the SPIRIT of the Antichrist that has been at work [1 John 4:3] subduing and bringing all the governments of the world into subjugation to the coming Antichrist’s RELIGION — Islam. After all, Satan is the ruler of the present state of the world [Luke 4:5-6; 2 Corinthians 4:4].

While we do well to take note of these other things (to some extent), Islam is the much greater concern. But, sometimes so much time is spent tracking these other things that they have become major distractions from what Bible prophecy says we need to be watching for. So, if we want to know where to place our focus, we need to be grounded in PROPHETIC GEOGRAPHY.

Consider, all of the nations Christ judges upon His return are listed by name in the Old Testament prophets and they are all located in the Middle East, not Europe or anywhere else. You will never find a European nation in Bible prophecy being judged by Jesus when He returns. This is something we can all look up for ourselves.

Right now, we are watching a religion occupy this area of the world that is even now seeking Israel’s destruction by SURROUNDING her [Joel 3:11-12; Zechariah 12:16, 14:14], attempting to REVIVE a kingdom [Revelation 13:3] across the Middle East (Babylon) and the world while BEHEADING Christians [Revelation 20:4] and anyone who does not pledge thought (forehead) and deed (hand/arm) to it [Revelation 13:16].

This means the West/UN/Illuminati/NWO will FAIL in it’s ambition to rule the world. This is why it seems that everything Western nations are doing only enables the Middle East to grow stronger. It seems this way because that’s exactly what’s happening. The West’s growing totalitarian ideals have opened the door for something even more brutal.

The Lord frustrates the decisions of the nations; he nullifies the plans of the peoples. [Psalm 33:10 NET]

The West’s descent into TYRANNY will only allow this greater evil to thrive. It already is. Consider our current state of the emasculation of our society through ideals such as tolerance, moral relativism, a non-belief in evil (and God), the celebration of homosexual marriage, the idea that no one should ever feel offended and political correctness to name a few. Imagine those things on one side of the “battlefield” and the hatred of Islam for anything other than itself on the other. Only one of these can win and it doesn’t look well for us, earthly speaking. You might even say Satan is stripping us bare while he builds the vehicle that will bring about his coming kingdom. I would.

And ECUMENISM… this is the nail in the coffin. Once you open the door and let the religion that declares death to all others into the “ecumenical room,” everybody loses. This is one reason why it is important for Christians to put on their thinking caps and start making a distinction between a one-world religion, which the Bible doesn’t speak of, and one religion attempting to take over the world, of which it does speak [Daniel 11:38-39].

WHERE IN THE WORLD ARE YOU?

One thought on “Christian, You Do Well to Recognize the Spirit of the Antichrist, but What of His Religion?”